rpi2pachube is a set of scripts written in Bash that gather and push performance data from your Raspberry Pi to Pachube.

Arch Linux users: You WILL have to download the source code for ifstat and compile it yourself if you want to monitor a network interface with this script. Arch Linux's ifstat command output format is significantly different from Debian's ifstat. You will otherwise have to modify rpi2pachube to work with whatever flavor of ifstat Arch Linux uses if you do not wish to do this.

How does it work?

rpi2pachube gathers performance data from your Raspberry Pi (temperature, load, network throughput, etc.) at 5 minute intervals and pushes this data to Pachube. From Pachube, you can watch how your Pi is doing from basically anywhere in the world.

Where can I get it?

Remove any files from any previous versions before installing version 2.0.

There's two ways to get rpi2pachube v2.0.
If you'd like to run the development version of rpi2pachube, simply clone the Github repository without running the command "git checkout v2.0".
After that, run the configuration utility:

Now rpi2pachube.sh will be executed every 5 minutes in the background. Take a look at my feed, populated with performance data from my own Raspberry Pi.

Found a bug or have an idea?

If you have found a bug or you have an idea to enhance rpi2pachube, please open a new issue on the Github repository.
Published by Unknown at 12:58 PM 6 comments:

Luckily for us, the Broadcom BCM2835 SoC on the Raspberry Pi comes with a hardware-based watchdog timer that can do just that. You will find this specially useful if you have a Raspberry Pi in a remote location and the operating system hangs and there's no one around to reboot it.

If you are running Raspbian, to load the module the next time the system boots, add a line to your /etc/modules file with "bcm2708_wdog". The -a option makes sure tee appends instead.
$ echo "bcm2708_wdog" | sudo tee -a /etc/modules

In Raspbian, run the following command:
$ sudo apt-get install watchdog
But in Arch we use pacman:
$ sudo pacman -S watchdog

Then, make sure it runs after every boot.
In Raspbian, run:
$ sudo update-rc.d watchdog defaults
OR
$ sudo chkconfig --add watchdog
In Arch run the following:
$ sudo systemctl enable watchdog

Uncomment the line that starts with #watchdog-device by removing the hash (#) to enable the watchdog daemon to use the watchdog device.
Uncomment the line that says #max-load-1 = 24 by removing the hash symbol to reboot the device if the load goes over 24 over 1 minute. A load of 25 of one minute means that you would have needed 25 Raspberry Pis to complete that task in 1 minute. You may tweak this value to your liking.

In Raspbian:
$ sudo chkconfig watchdog on
or
$ sudo /etc/init.d/watchdog start

You are done! You may play around with the settings in /etc/watchdog.conf if you'd like.
The watchdog daemon performs other tests that you will probably want to configure.

The Pachube API makes it very easy for you to make your Raspberry Pi part of the Internet of Things (IoT). After successfully following this short tutorial, you or any computer connected to the Internet will be able to keep track of how your Raspberry Pi is doing. Even more useful if you have more than one and wish to track them all at once.
This blog post is the result of a brief tutorial I made in Google+'s Raspberry Pi community for +Kim Huebel.

Arch Linux users: You WILL have to download the source code for ifstat and compile it yourself if you want to monitor a network interface with this script. Arch Linux's ifstat command output format is significantly different from Debian's ifstat. You will otherwise have to modify rpi2pachube to work with whatever flavor of ifstat Arch Linux uses if you do not wish to do this.

Create a feed on Pachube

That is all! Feel free to leave a comment.

Update (Wed, Jan 23rd, 2013): Added "realpath" as a requirement. Renamed script to rpi2pachube and moved repository to a new location.

Legal disclaimer: All mentions of the letter sequence "cosm" on this post or Github repository (or in combination with other letters, or any other representation) refer ONLY to the on-line database service called Pachube and NOT to Cosm®, a trademark that is registered to Mithral Inc.
Published by Unknown at 3:37 PM 7 comments: 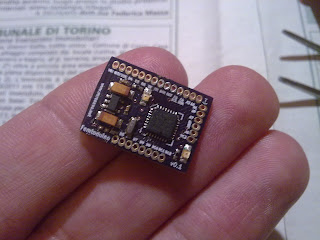 The Femtoduino is an ultrasmall (20.7x15.2 mm) Arduino compatible board licensed under Creative Commons Attribution-ShareAlike 3.0 Unported (CC BY-SA 3.0).
It is being developed by Fabio Varesano after he needed to add Arduino functionality to small objects.
The result is what you can see on the picture of this post.

Unfortunately, the board is not being sold, meaning you will have to buy all the parts, make the PCB or order it from a fab house and solder all the components yourself.
Luckily, Fabio has shared everything you'll need to build this little devil.

You can buy all the parts by visiting the following link: https://www.mouser.com/ProjectManager/ProjectDetail.aspx?AccessID=b90666b717 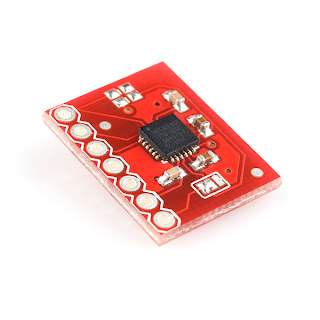 ITG-3200 breakout board by Sparkfun Electronics
I've updated the library to communicate with the ITG-3200 gyroscope by Invense.
In this new version I've included all necessary functions to use the gyroscope's interrupt.

Note: Default values (including I2C Address) are set up to work with SparkFun's ITG-3200 breakout board.

Also, included with the library are two examples, one with interrupts, and one without them.

The following link will take you to the GitHub repository: https://github.com/Cameri/Itglib

You can download the source code by clicking here.

Feel free to post your comment below.
Published by Ricardo Arturo Cabral Mejía at 3:20 PM No comments: 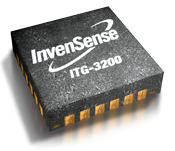 Here's the first revision of a library I made for the ITG-3200 3-Axis Gyroscope made by Invensense.

UPDATE: This library has been updated as of January 16th, 2011.
Published by Ricardo Arturo Cabral Mejía at 8:53 PM 4 comments:

Here's cheat sheet for reading SMD Resistors that I came up with recently.
If you have trouble reading these components, try using a magnifier. 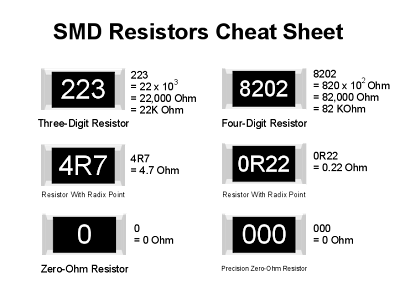 Here's the link to view it.
If you think you can't solder these think twice, these are actually pretty easy after you practice a couple of times. Here's an 8-part tutorial from the folks at Sparkfun Electronics.
Published by Ricardo Arturo Cabral Mejía at 8:45 AM No comments: